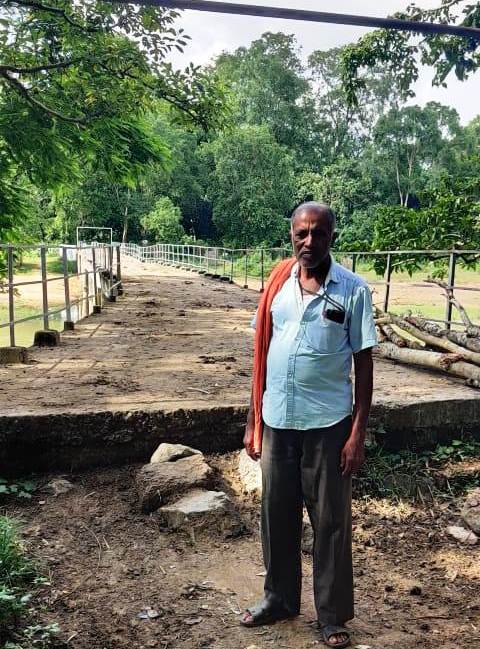 Bridge to the village with the pension money

Keonjhar: In a demonstration of social engagement, a 65-year-old man from Hatadihi area in Keonjhar district built a bridge over the Salandi River by spending his pension money of Rs 16 lakh. Rs 2.10 lakh was contributed by others.

According to reports, Gangadhar Rout, a retired government worker from Soso-Kanpur village made a name for himself in the district by undertaking the welfare initiative with his retirement money. Some people have nicknamed him “the bridge man” in the area.

However, the bridge is unused as work on the access road remained unfinished. His dream has not yet come true. He built the bridge with a dimension – 270ft (27ft X 10ft).

Previously, work on the bridge had been abandoned halfway. It resumed construction in March 2018 and completed it in August 2019.

“The only problem is that an access road to the bridge was not completed due to lack of funds. All that money with me is used up. But the help and cooperation of the people are not available to carry out the project, ”he lamented.

He was celebrated and honored for his noble effort. However, he lamented that the government is not providing assistance to carry out the project.

He said his son, wife and granddaughter contributed to the project according to their abilities.

It was celebrated in New Delhi by an organization with a price of Rs 1 lakh. He spent the money on an approach road on one side of the bridge when more money is needed to lay the approach road on the other side. “I did not give up my efforts to finish the road,” he observed.

Earlier, people waded in the river, risking their lives. Although the government has the Biju Setu Yojana, it is of no use to the locals, he added.

Residents demanded a bridge over the river, but their calls fell on deaf ears of the administration and local leaders.

“When I was on duty, I decided to build a bridge. A lot of people laughed at it. Despite the financial constraints, I started work on the bridge after I retired. It was established with eight pillars, ”he added.

After the completion of the access roads, the bridge will open communication between many villages like Kanpur and Daneipur in the region, he added.